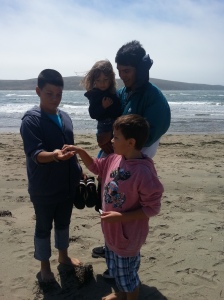 So, my oldest son Elijah, is nearing his 18th Birthday, which means he is almost an adult. In many ways, he is already like a little adult. He drives himself to work & school, manages his own schedule, and has an active social life outside of the family. In addition to this man-child, I also have three younger children who are 12, 8, and 4 years old. Basically, I have children all over the developmental spectrum. But the manner in which I parent the younger three has gradually shifted as my eldest grew and taught me a thing or two about mothering. Things that once seemed important to me when Elijah was little, are trivial matters to me now. Over time, I’ve also learned to place more importance or other aspects of parenting that I didn’t give much thought to when I started this journey some 18 years ago. When you have an almost-adult at home, it changes the way you view your other children. Elijah is a walking reminder that my little ones will only be little for so long. That’s an obvious clique, I know, but one that is hard to comprehend in it’s entirety when you are cradling your first newborn and time seems to be standing still. Here some are the things I’ve learned as a parent of a teenager:

1) Our children do not belong to us.                                                                                      When my Elijah was little, I spent a lot of time dressing him up, showing him off, and delighting in the fact that he showed interest in the fads and hobbies I introduced him to. I can’t say I thought of him as a possession, but I certainly felt a sense of ownership over the little guy. Not so much anymore. Though I can see that many of his attitudes and beliefs about the world are a reflection of the home in which he was raised, he also has a mind and will of his own. As he should. Soon, very soon, he’ll venture on out of the nest and into adulthood. The days in which he was my default sidekick are a thing of the past. This realization is constantly on my mind as I watch my younger children grown into their own unique personalities, and it gives me the patience & perspective to deal their increasing bursts of autonomy. Yes, they are in my keeping now. But someday soon they’ll be independent of me with lives of their own. Last week, Elijah randomly text me during the middle of the day asking me if I was busy that evening & if I’d be willing to accompany him to his friend’s soccer game. I wistfully remembered the days in which I made all his plans and accepted invites on his behalf. Then I smiled, and cleared my schedule for the evening. When your teen invites you somewhere, you accept. Graciously.

2) No matter how cool you think you are, you’ll never be one of them.                         I had Elijah when I was 17. Which now makes me 34 years of age with a 17-year-old kid. Which means I sometimes fool myself into thinking I’m still kind of hip in terms of pop culture & trends. But boy, do teenagers have a way of humbling us. Soon after Elijah entered middle school I realized I will always be ten steps behind in terms of what’s “in”. Though we largely share the same taste in music, fashion trends, and some aspects of pop culture, my son still views me as out of touch & jokingly refers to my friends and I as “old.” He cringes every time someone asks if I’m his sister. In his own subtle way, he has reinforced the fact that he values me more as a parent than as a friend. Because I’m not his peer, nor does he want me to be. I’m here to enforce rules, impart wisdom, and provide guidance. And every now and then, he’ll hint at how grateful he is for the relationship we have.

3) Be mindful of your screen time. What are you reaching for?                       Teenagers are really into their electronic devices. But I’m sure you already know that. I preach moderation, and have always put limits on screen time though it’s sometimes difficult to enforce, especially as they get older. I’ve filled their days with a multitude of alternative activities including outdoor excursions, trips to museums, libraries and other such places in an attempt to show them the world beyond screens. But still, when he’s not playing baseball or at work/school, that teen of mine has his smartphone in hand almost always. A while back, we were talking about what a clingy toddler he was, and I quipped that he now reaches for his phone more than he reaches for me. Minutes later, the profoundness of the statement hit me. What do my younger children see ME reaching for? Am I more likely to be holding a device, or their hand? I’m already self-conscious about this, as I work with families on a daily basis, and I constantly see parents with faces in screens while their children attempt to get their attention. But this conversation prompted me take a hard look at my own behaviors, and make a concerted effort to put the problematic ones in check. Have you reached for your child today?

4) YouTube can be a great teaching tool.                                                                          Speaking of screen time and technology, I’ve noticed that Elijah and his brothers use YouTube for all sorts of things besides watching pointless viral clips for entertainment. They’ve taught themselves everything from how to repair a bicycle, to updating smartphone software, to creating their own incense holders. After watching my son plunk away at the piano keys using a YouTube tutorial video, I got an idea. That week, my toddler suddenly developed an aversion to teeth brushing. After a few nights of literally holding her down while struggling to clean her teeth amidst thrashing and flailing limbs, I decided to take a more logical approach to her dental hygiene. The next evening, right before bedtime, I sat her in front of the computer and searched for images of  “toddler tooth decay.” Video after video popped up of children with teeth in varying states of decay. I explained to her why it’s important to brush her teeth, and showed her the cavities that form when we don’t. She was cured. That night, she willing opened her mouth for her nightly brush, without a peep. I’ve used this method for other things as well, including the time my two youngest began complaining about seat-belts and booster seats during a long road trip. After watching a video of crash-dummies being ejected from cars during an accident, they smartly made the decision to stay buckled, noting that it’s far more comfortable to be strapped in than to be injured in an accident. Kids are pretty logical. When we began to show them the reasons behind our rules, you’d be surprised at how well they cooperate.

5) In the end, your influence does matter (but there is no magic formula).                                        Just as we spend 18+ years watching over them, they are observing us as well. As Elijah enters adulthood, I can clearly see the way he is a product of his parents, step-parents, and extended family. All of our collective habits, hobbies, conversations and attitudes are downloaded into our children’s brains during their formative years, and they without a doubt influence the people they become.  Here’s the catch: it does not necessarily mean  they are doomed because of certain circumstances or redeemed due to others. I’ve been working in the field of education for 15 years, and during that time have worked closely with hundreds of families. I’ve met children who have come out of “broken homes” to become grounded, whole, and productive young adults. On the flip side, I’ve seen children from affluent two-parent, religious households slide into depression and addiction. And in between those extremes I’ve witnessed a wide array of stories play out which have lead me to believe that there is no magic formula to raising a child. But there is one thing that continually arises as I hear the individual accounts of children and their families: we internalize the realities of our childhood. We absorb the environments we are raised in. But we come out of them with our own unique understanding and strength. And no one, not even our parents, can predict what that will look like when all is said and done.

Maybe for scaring us with unexpected rage
or making us nervous
because there never seemed to be any rage there at all.

Do we forgive our Fathers in our age or in theirs
or their deaths
saying it to them or not saying it?

If we forgive our Fathers what is left?

* This poem is read during the last scene in Smoke Signals. It was
originally published in a…